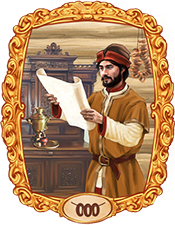 Table. Cost of education of a peasant in the sciences to obtain the status of a burgher

Oh my friend, you are already a burgher, great! Just imagine, only a little over 3.5% of the entire population of Clone Earth has earned the social status of "Philistine.

Your government subsidy got even bigger. Your opinion is listened to in the town square (chat).

You can become a great city builder, you can establish your own principality!

But first of all, go to university - the "Psychology of Success" section is now available to you - a bourgeois!

A burgher is the first noble status, which gives a wide range of additional opportunities. A burgher, having all the capabilities of a peasant, in addition, can carry out labor activities:

A resident of the "farmer" social status can only develop the settlement to the level of a village. The bourgeoisie, on the other hand, is open to the construction of a megalopolis.

If you want to save as much money as possible, you have to do some social work - to attract new residents to your settlement. That they build houses, get households, and work in your enterprises. Now you're an "uncle" and they work for you!

You have leverage, you set the price at which you buy resources from businesses (thus assigning wages to workers), you can increase or decrease social subsidies to your residents.

If you do not want to waste time on agreements with other players - build everything yourself. Create your own army of clones, put them to work for your enterprises!

Apart from that, you should think about expanding the sphere of influence of the power of your settlement. This can be done by attracting clones who want to create their own settlement on YOUR territory. Thus, they will all be administratively subordinate to your settlement. This means that you can collect taxes from the construction of all production plants.

It is necessary to hurry up and develop your settlement, because if any settlement administratively subordinate to you becomes a level equal to or higher than yours, it will leave your power.

As you progress, you'll have more and more plants and factories available for you to build. The gold of the treasures, which will be able to discover your team, can not fail to please the eye.

More and more productions become available to you.

Now you can store some of the resources in the storehouse, saving for some buildings, some if you want you can sell on the commodity exchange.

You're becoming an increasingly frequent visitor to the marketplaces, you've already been noticed, be assured…

Or maybe you started getting personalized offers for supplies of this or that resource from other merchants?

Create your principality - your state. Be its ruler! It will be able to have houses and castles and settlements on its territory, all of which will be under the direct authority of their prince.

The prince can assign social subsidies to the inhabitants of his duchy, can collect taxes from the settlements. This is a huge step toward becoming your own empire. Princes have a list of additional state deductions, these deductions are quite weighty, their size also depends on the level of development of the principality.

At the Auction of principalities you can try to pick up a variant of already finished state of this or that level of development, it depends on the proposals from reputable developers… If you acquire a principality, all you have to do is turn it into a mighty empire.

The principality has a huge capacity, including production, engineering and military, has its own squadron… It is a transition to the elite of the inhabitants of Clone Earth. Your direct path is to the imperial throne. However, this path is not easy…

You can try your hand at that as well. It is very promising, since any developing state is subject to pressure from its neighbors. Clone Earth is no exception, the virtual state being attacked by aggressive aliens. A reliable state is a strong state! The princely armies are the backbone and protection of the Clone Land. The state generously pays for the work of professional volunteer brigades.

You can go into the service of some prince's squadron. Your status allows you to run a battleship! This can be a fairly profitable enterprise. Just keep in mind, there's no place for rookies! Experience and practice is necessary in everything, so if the choice falls on a military career - train on the princely arenas, drink more kvass, and will come in you strength and military experience.

A battleship guided by a competent captain can work wonders on the battlefield, which will surely be followed by honorable rewards, military subsidies, and trophies.

A literate resident of the state is sure to create a portfolio of securities.

Securities are an indicator of the mood and profitability of a particular sector of the state. All of them bring daily income in the form of accruing dividends (in gold). The size of the returns can fluctuate. Therefore, having a set of different types of securities, you can create an additional passive and fairly stable income. There is no such thing as too much gold, so they say in our world.

Securities are best bought at an auction, where they go to the lowest (nominal) price. I recommend that you keep track of the returns on all securities, statistical information can be found on the financial report page. You can understand which securities are the most profitable and stable at the moment, that is, represent the "blue chips" of the state.

Currency exchange. If you noticed, the exchange rate of gold to klonkoin "floats". You can earn ringing gold on these fluctuations. After all, you can buy gold coins when the price is lowest, wait patiently for the price to rise, and sell at a higher rate, making a profit in the process.

Be careful! As they say, go with the flow. It's important to find the right - "low price", make no mistake!

The Merchant's Guild is the next step in social growth.

Merchant status will emphasize your seriousness, your words and actions will be listened to.

You'll be able to discuss economic strategies on an equal footing with large wholesalers.

Three steps will separate you from the imperial throne.

I'll visit you when you become a member of the guild. I wish you success and great builds!