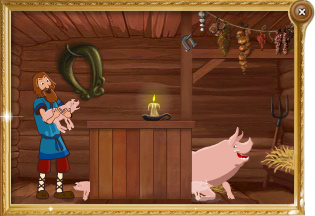 Sooner or later every livestock farmer is faced with the question of expanding his farm. The more animals in your account, the more products you will produce.

You can increase the number of pigs in two ways:

Buying new animals is a simple enough task. It is much more interesting and profitable to use the second option and breed animals yourself, improving their characteristics for a long time. Here we will look in detail at the selection and preparation of animals for mating, the processes of mating and procreation, and pig breeding issues.

For mating, you first need a suitable pair of animals - a sow and a boar that are ready to mate. If you only have a sow - no problem, you can always breed her with a boar rented from the Boar Fair.

Both the sow and the boar must meet the necessary requirements:

Young (up to and including 30 days old) and old (over 350 days old) animals may not mate. However, if a sow has reached the age of 351 days after successful mating with a boar, being a gestating sow, she will continue to carry the litter and give birth to piglets in due time (of course, within the total life span of the animal of 380 days). Please note that a sow's gestation period is at least 35 days. Make your mating arrangements with these dates in mind.

After mating, your sow becomes a gestating sow (the term "gestating" means that the sow is carrying piglets). A question mark icon will appear to the right of the image of the sow. When the entire bar above this icon fills with green, it means that it is time to give birth, your sow will farrow very soon. With an optimal feed ration, the sow will bear a litter for 35 days. If her feed ration is not optimal, the hatching period becomes longer.

After a litter is born, your sow should rest before the next mating. She will be able to mate with the boar again in 10 days.

As for the boar, he also needs to rest after mating. A boar-producer needs only 10 days to regain his strength. After that, he is ready for the next mating.

The above periods are calculated for the case when the animals receive an optimal feed ration. If the feed ration is not optimal, these periods become longer.

Number and weight of offspring

After each mating, the sow can usually bear and give birth to 5-7 piglets.

The key characteristic of every newborn animal is its weight. After all, the heavier a piglet is born, the more weight the adult animal will have after fattening and the more production it will produce. The total weight of all piglets in the litter depends on the weight of both parents - the boar and the sow. Therefore, it is very important to choose the right pair for mating.

The total weight of the litter is calculated using the following formula:

The K coefficient in the general case is 0.06 (i.e. 6%). This is the value that should be used in most calculations. However, if you have a pigsty built that has been improved with magic solar plates, this factor will increase. If you have a developed pigsty, you can get heavier piglets.

The weight of each individual piglet is affected by the value of the inbreeding coefficient. Moreover, if the weight of any piglet as a result of a high inbreeding rate is less than the minimum threshold (0.6 kg), such a piglet is considered stillborn.

Let's say the boar weighed 110 kg at mating and the sow weighed 90 kg at the time of farrowing. Then the total weight of the newborn piglets will be equal:

You already know that each clone has limits on the maximum number of cattle in a barn, depending on its social status.

The piglets immediately after their birth will belong to the same clone that the sow that gave birth to them belongs to, provided there is room for new cattle.

So what happens when the number of animals owned by a clone, including born piglets, exceeds the maximum possible number? In this case the "surplus" newborn piglets will be given to another clone of your account whose social status allows you to accept the animals.

And such a clone will be chosen according to the rules, in order of priority:

If all your clones have reached the livestock limit and cannot take a newborn animal, the following will happen:

Warning. After transferring ownership to another clone, the animal will be fed in the new owner's barn from the first day of life. If you have a pigsty and free space on it, the animal will feed from the pigsty feeder. Make sure you have enough feed for the newborn piglets. A newborn animal's first food intake occurs immediately after birth.

The breeders of the Clone Land are able to carry out selection work - breeding pigs with better characteristics and continually improving them.

Inbreeding (close crossbreeding) plays an important role in breeding. A true breeder is very serious about selecting individuals to produce a more developed generation of animals. Close relationships between future parents are not welcome, as this can radically affect the characteristics of all future generations.

When crossing animals, it is important to select producers with higher rates of athletic performance and minimal inbreeding coefficient. The skills of the offspring born depend on these indicators.

Developed sports skills of boars-producers can be passed on to the next generation. The characteristics of the litter are calculated according to the formula:

In addition, high performers pass on to their offspring an increased maximum threshold of athletic skills.

The inbreeding rate in mating depends on the degree of relatedness of the parents. In the course of lengthy research, Golden Clone scientists were able to prove that the Wright-Kislowski formula, which determines the inbreeding coefficient (that is, the degree of closeness of two individuals), applies to our pigs as well.

The fewer relatives the mated individuals have, the more likely their offspring will receive an increase in the maximum characteristic. Conversely, the stronger the relationship, the higher the probability of lowering the maximum of one or more characteristics.

If the inbreeding rate exceeds 0%, there may be anomalies in the birth of offspring, such as a severe decrease in the maximum threshold of some sports skills and zero sports skills in the born offspring.

Before mating, you can look up the pedigree of any pig (as well as ancestral characteristic values) all the way down to the 4th tribe.

Table. Inbreeding coefficients depending on the degree of kinship of animals