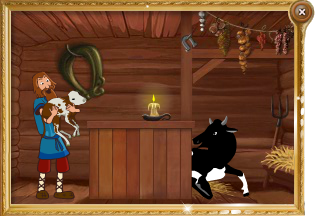 Sooner or later every livestock farmer is faced with the question of expanding his farm. The more animals in your account, the more products you will produce.

You can increase the number of cattle in two ways:

Buying new animals is a simple enough task. It is much more interesting and profitable to use the second option and breed animals yourself, improving their characteristics for a long time. Here we will look in detail at the selection and preparation of animals for mating, the mating process, and the birth of offspring.

For mating, you first need a suitable pair of animals - a cow and a bull, ready to mate. If you only have a cow - no problem, you can always slaughter her with a bull rented at the Producer Bull Fair.

Both the cow and the bull must meet the necessary requirements:

Young (up to and including 60 days old) and old (over 420 days old) animals cannot mate. However, if a cow is 421 days old after successful mating with a bull and is pregnant, she will continue to carry the calf and give birth to a calf in due course.

Also, if you are going to happen your own cows and bulls, you will need to build any level of barn. The mating of two of your own animals can only be done in a barn. If you're going to be mixing your cows with rented bulls, you don't have to have a barn.

After mating, your cow becomes a pregnant cow (the term "pregnant" means that the cow is carrying a calf). A question mark icon will appear to the right of the cow image. When the whole bar above this icon is filled with green, it means that it is time to give birth, your cow will calve very soon. With an optimal feed ration, a cow can have a litter for 26 days. If her feed ration is not optimal, the hatching period becomes longer.

Of course, the cow owner may be interested in the question of whether a bull or a heifer will be born. The workers of the Tower of Alchemists will help you in this matter. You just have to show your pregnant cow to an alchemist, who will use alchemical analysis to determine the sex of the future calf. Travelling a clone with a cow to the Innovation Center requires the expenditure of 300 stamina units. But after this procedure, the germ icon will appear instead of a question mark. If it is blue, the cow will have a bull, but if it is pink, she will have a heifer. Click on the question mark icon to use the gender detection feature.

After a litter is born, your cow should rest before her next mating. She will be able to mate with the bull again in six days.

As for the bull, he also needs to rest after mating. A bull breeder needs only 5 days to regain his strength. After that, he is ready for the next mating.

The above periods are calculated for the case when the animals receive an optimal feed ration. If the feed ration is not optimal, these periods become longer.

Number and weight of offspring

After each mating, a cow can bear and give birth to only one calf.

The key characteristic of every newborn animal is its weight. After all, the heavier the birth calf, the more weight the adult animal will have after fattening and the more production it will produce. The weight of the calf depends on the weight of both parents, the bull and the cow. Therefore, it is very important to choose the right pair for mating.

The weight of a newborn calf is calculated using the following formula:

The K coefficient in the general case is 0.06 (i.e. 6%). This is the value that should be used in most calculations. However, if you have a barn that has been improved with magic solar plates, this coefficient will increase. In other words - if you have a developed barn, you can get a heavier calf.

Let's say the bull weighed 421 kg at mating and the cow weighed 450 kg at calving. Then the calf will weigh:

You already know that each clone has limits on the maximum number of cattle in a barn, depending on its social status.

The calf immediately after its birth will belong to the same clone that the cow that gave birth to it belongs to (if there is room for new cattle).

So what happens when a clone already has the maximum number of animals in his property, and one of his cows gives birth to a calf? In this case the newborn heifer or bull calf will be given to another random clone of your account whose social status allows you to adopt the animal.

If all your clones have reached the livestock limit and cannot take a newborn animal, the following will happen:

Warning. After transferring ownership to another clone, the animal will be fed in the new owner's barn from the first day of life. If you have a barn and free space in it, the animal will feed from the barn feeder. It is worth taking care to have enough food available at the time of birth. A newborn animal's first food intake occurs immediately after birth.