This section describes the stages of agricultural activity in the order in which they occur, forming the cycle of farming in the Golden Clone. The actions listed in the current phase must be performed in order to advance to the next phase. Some of the actions of the stage are mandatory, some are not.

Maximum agricultural production is achieved by increasing soil fertility. Fertilizing is an important (though optional) step in farming. Crops will grow without fertilizer - but the yield will be smaller. An experienced entrepreneur will always find the golden mean and be able to calculate his benefits - both when using fertilizers and when not using them.

Soil fertilization in the clone state can be done by two methods:

These two methods are complementary - they can be used together or separately. If used at the same time during one agricultural cycle, their effect is summed up. The order of execution is not important - you can manually fertilize the field first and then start grazing the peacocks, or you can do the opposite.

You can produce fertilizer yourself in "Business → Livestock → Manure and Fertilizer" from manure produced by your livestock or poultry, or buy it from other players at the Fair.

The manual fertilization period takes 5 days (120 hours) if the plot is fertilized to the maximum possible extent (100% fertilized). The time required is proportionally reduced according to the amount of fertilizer applied (you can also fertilize the field with less fertilizer).

The duration of peacock grazing in the field is 2 days (48 hours).

A few important things to consider when fertilizing plots of land:

The next step is sowing the seeds in the field. Sowing can be done on both fertilized and nonfertilized fields. This is a mandatory step of the agricultural cycle, which lasts 2 days (48 hours).

Crop seeds must be purchased from the Biotechnology Department at the State Farm to plant plots of land. One bag of seeds is enough to sow one plot of land with the appropriate crop.

The sowing process is carried out in the following order: first the fields fertilized during the current farming season are sown, then those fields that cannot be fertilized this season (i.e. fields that were fertilized last season), and then all the remaining fields. Having an attached irrigation system on a field increases the priority of seeding on that field in each category listed.

A few important things to consider when seeding plots of land:

Immediately after the completion of sowing work will automatically begin the ripening period of the harvest. This period lasts 15 days (360 hours).

The rate at which the crop ripens can be increased, thereby shortening the ripening period. If more than one condition is present, the corresponding speed increases are added together.

A few important things to keep in mind as the crop ripens:

Once the crop is ripe, the plot of land goes into a state of waiting for the harvest to begin. You must pay the agricultural tax for each ripe field before the harvest. Until the tax is paid, your crop will be in the fields waiting to be harvested, but it will not go to waste. During the tax waiting period, your clones working on these fields do not spend stamina.

The amount of tax depends on the type of crop grown.

The amount harvested from a plot of land also depends on fertilizer, among other things.

The tax you pay for the harvest goes to the State. From these revenues, the State makes payments to the following funds:

A few important things to consider when harvesting plots of land:

When harvesting is complete, the clone working in the field is automatically released from work on that plot, the harvested crop goes into that clone's inventory, and the land goes into a "black steam" state.

Farmland needs periodic rest as protection against depletion. Such a period of complete rest of the earth is called "black steam. "Black steam" preserves moisture in the soil, enriches it with nutrients (primarily nitrogen) and cleans the soil from weeds, pathogens and pests. On Clone Earth, the black vapor period lasts for 15 days (360 hours). Plots go into a "black steam" state automatically as soon as the "Harvest" stage is completed. In this case, the clones working in these areas are automatically released from work.

Also, all areas of land where you manually release clones from work at any other stage of the farming cycle go into a "black steam" state.

The duration of the black vapor period can be reduced in the following ways (the effect of all methods is summed up):

A single application of the Living Earth Elixir reduces the duration of the "black vapor" period on a given piece of land by 1 day (24 hours). One and the same plot can be treated with the elixir no more than 5 times in one agricultural season. Thus, the maximum reduction of the period of "black vapor" with the help of the elixir is 5 days (120 hours).

The Living Earth Elixir can be made at the Center for Innovation or purchased at the Fair.

For your convenience, our experts have developed a graphic comprehensive diagram clearly demonstrating one agricultural cycle on Clone Earth. 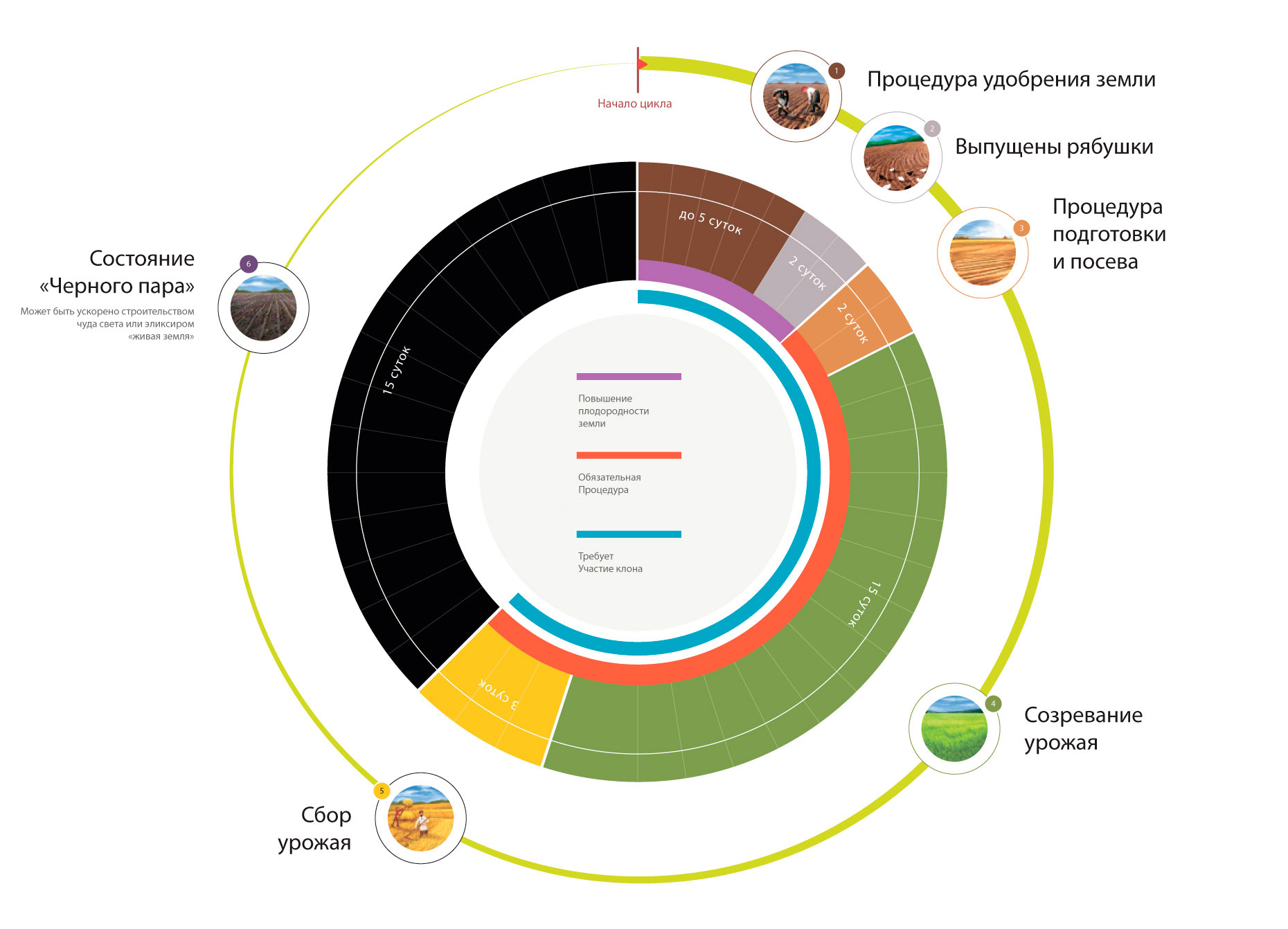